Were High flyers and Entertainment Collide

ZackBOOMZAP Vs. David "the viper" Maniac

He is a wrestler who doesn't like anyone, doesn't have friends and wants to complete his targets. The main title is always in his head and he makes his opponents' lives a living hell untill he gets the title...
When he was a child David was always bullied at school and one day, when he was going home, some guys attacked him from behind and break one of his legs. 3 months later David got his revenge.
He started to practice wrestling at the age of 17 and some time later a dog called fubu (ULLW gm) gave him a contract and he joinned ULLW.
Then he tagged up with Molocher, started an alliance called Demolition and created his wrestling school to teach young bullies fighting and making RPs.

aren't you with demolition anymore? 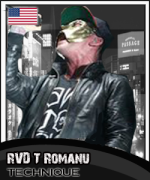 "He is a wrestler who doesn't like anyone, doesn't have friends and wants to complete his targets"

Hazz B vs. Drakath

alcatraaz and Trent Outlaw vs Shooting Star and Pain Inflictor